This blog is about the 'Build an Automated Chatbot with Programmable Voice Using Speech-to-Text' video, presented by Jan de Vries and Ryan Mocke from Mendix. You can watch the video here.

“Hey Mendix, when do you expect our next delivery?” Talking to a Mendix application is possibly not the first idea that pops into your head when brainstorming new business solutions. The good news is: it’s certainly possible.

The Mendix platform itself is evolving rapidly. Over the last few years, more AI assistance has been added to the platform. During Mendix World 2.0, more AI-related features were announced, like the static performance analyzer and even a runtime analyzer . One of the benefits of using Mendix is the ease with which you can integrate external services. And that means using AI-driven services in your application is accessible for you as a creator.

During Mendix World 2.0, Ryan Mocke demonstrated how to build a working chatbot by using speech-to-text and Mendix in less than an hour. And that was even with time left for questions.

A chatbot might seem intelligent due to its human-like skills, but it’s only as intelligent as the underlying database. Ryan starts the session by immediately breaking the romantic idea of a fully functional chatbot that runs on its own, out of the box. I believe it’s good to point this out, as this has been my experience with most AI projects as well.

“To the user, chatbots seem to be “intelligent” due to their informative skills. However, chatbots are only as intelligent as the underlying database.”

During the demonstration, Ryan had to use AWS Alexa, Twilio, ngrok and Mendix to make his solution work. In this architecture, Alexa is responsible for the user interaction via speech-to-text and text-to-speech. Next, the Twilio bot interprets the input and extracts the relevant data. This data is sent to a Mendix application, which determines what needs to happen next and what Twilio’s response should be.

For those of you who have worked with AWS Alexa before, you might think: “why use Twilio instead of AWS Lex, the conversational interface service from Amazon?” During the Q&A, it became clear that using Twilio enables you to build your conversational logic once, while serving it over multiple channels afterwards. In practice, this means that the same chatbot can be used via WhatsApp, Slack, Facebook and many more. By using a service like Twilio, you make sure that your smart assistant works not only via Amazon’s smart speaker.

As Simon Black joined the session later on, both presenters offered valuable insights during the wrap-up. One of the main takeaways is that in general all chatbots share the same core concepts: conversational interfaces always include intents (triggers), entities (the thing you want to act on) and tasks (what needs to happen with the entity). When building a chatbot using Twilio, for example, the chances are that you’ll be able use comparable services as well.

There was also a short discussion on the value of these services. Expectations are that conversational user interfaces will become more of a commodity in the coming years. This is part of Gartner’s prediction that seamless multi-channel interfaces will be standard in the near future. It’s important to keep in mind that people are not looking for a long discussion with their smart speaker. Simon claims that it’s more realistic for end users to ask short questions like “what does mortgage mean?” Because you must admit: even at home, interaction doesn’t go much further than “turn on the lights.”

Chatbots will become a more common concept in app development as part of the multi-channel experience. Low code needs to fulfil an important role: making the bot genuinely intelligent. Gartner predicts that apps will leverage the best of all platforms. Think about ordering office supplies via your smart speaker while confirming your credit card details via your mobile device. When using microflows in Mendix, building this logic will be much faster.

In summary, I would definitely recommend watching the video on the Mendix World 2.0 platform. For me, it was unexpected that the Mendix application became the backend workhorse only, instead of the actual user interface. I will definitely dive into this further and explore the powerful possibilities of conversational interfaces with Mendix. 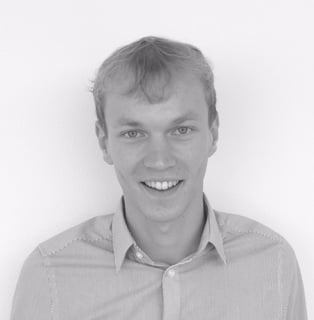 Jeroen Appel I started working as a Mendix Consultant at Mansystems in 2016. Several projects later, I became more and more interested in designing scalable cloud- and application architectures. Additionally, I really like using the power of AI and Machine Learning in the applications I’m working on. It is awesome to see how fast you can innovate when you bring this together with low-code development.